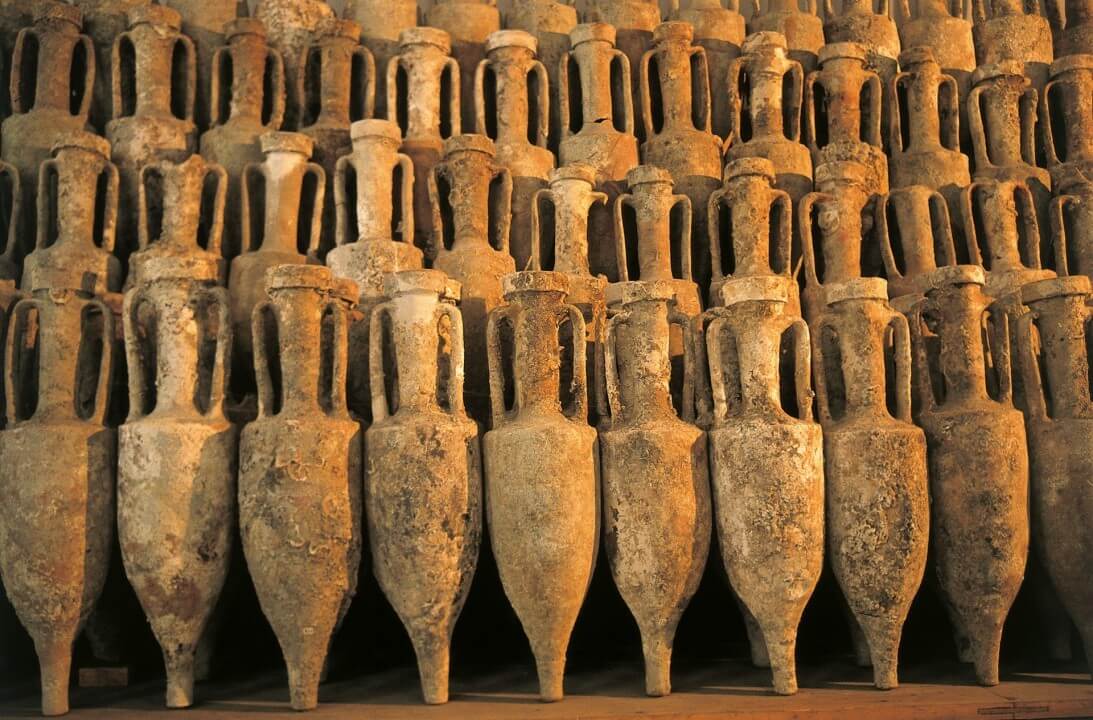 A short history of packaging

Packaging is such an everyday object in our lives that we do not realize how much it has accompanied humanity throughout its history. Packagings are fundamental because they meet 3 primary needs :

The very first known packaging, very simple, dates from prehistoric times. They were made of leaves, animal skins assembled in baskets or wineskins, or even roughly carved wood.

Basketry was then discovered in Egypt, more than 10 000 years ago. It allowed the manufacture of baskets of all shapes and sizes, simple and practical, sometimes even artistic.

Then men learned to master fire, allowing the production of ceramics. Pottery, and in particular the amphora, was invented in antiquity, between the 4th and 3rd millennium BC, for liquids such as wine, oil and beer. The rot-proof terracotta replaced advantageously the wood, coming from sometimes insufficient forests.

But the amphora is fragile, it breaks easily during its transport. The barrel thus succeeded at the beginning of our era. It was invented by our ancestors, the Gauls, in regions with large reserves of wood. This method is so efficient that it is still used 2000 years later in the form of oak barrels to preserve great wines. A particular interest of the barrel is the contribution of this very characteristic woody taste.

Glass has also been known since ancient times, but its manufacture was poorly mastered and only allowed the realization of simple and small objects. It is the glass masters of Murano, next to the rich Venice, who will master the manufacturing technology to make art objects from the Middle Ages. Their expensive productions will remain reserved for a wealthy population. The modern bottle, as we know it for wine, robust and inexpensive, is invented by the English in 1634. It was adopted throughout Europe in the following decades.

Metals (gold, silver, bronze, various alloys) have also been used since antiquity to make chests, boxes... But the real development in large quantities of metal packaging is due to Napoleon Bonaparte who promised in 1809 a reward of 12,000 germinal francs to whoever could invent a solution to preserve food for his armies. This is how the process of appertization was invented, i.e. canning, by Nicolas Appert. Metals are solid, but heavy and more expensive, they are particularly adapted to deliveries with security or volume constraints.

Finally, cardboard was invented in 1751 by a student of the physicist Réaumur to make playing card bindings. It is its declension in corrugated cardboard, light and not expensive, in 1856 (cardboard to make hats more rigid!), which allowed to democratize it for the packing.

The arrival of plastic

The 20th century is the century of plastic, used in an incalculable number of objects and uses, with all possible forms.

Rubber and latex are plastic materials, completely natural, used since antiquity. Artificial plastic dates back to the end of the 19th century and there are many key dates in its history. 1870: invention of the first artificial plastic, celluloid by JW Hyatt during a contest to replace the ivory of billiard balls. Celluloid was used for a long time for cinematographic films, but was abandoned because it was inflammable. We can also mention the invention of bakelite in 1907, the first plastic produced from an industrial polymer.

Finally, polypropylene (PP), used for some of the LivingPackets BOX parts, was invented in 1954 by the Italian chemist Giulio Natta, who later won the Nobel Prize. Plastics are the subject of numerous research projects aimed at reducing the use of terrestrial resources and the resulting pollution: starch-based bioplastics that are less dependent on oil, plastics that are more recyclable or biodegradable, etc.

Materials and the evolution

Packaging is very varied and has played a fundamental role throughout human history. It took human ingenuity and the invention of many production processes to make them available to everyone. But it has also taken the use of the many materials that make them up. We can summarize by saying that until the end of the 20th century, men have used the materials that nature made available to them:

As shown in the figure below, paper & cardboard is the most used for packaging: 34% of the 12 million tons of packaging produced per year in France. But cardboard is insufficiently reusable, which is a major problem.

Packaging is now evolving to become greener, the demand is very strong for ecological reasons. What can we imagine for the packaging of tomorrow? Are we at the end of major evolutions if everything has been invented?

Our vision for transportation packaging at LivingPackets is clear. We are at the beginning of a triple revolution: technology, reuse, service. That is why we have built an unparalleled value proposition.

The cardboard packages are very basic: a simple box. One can really be surprised: can't we really do better and more ecological with the 21st century technologies? The answer is yes, and with many technologies that we master:

This is the heart of the LivingPackets vision and our daily motivation. Finding solutions to avoid all unnecessary or single-use waste: no more cardboard, no more packing material, no more tape... Beyond the technical solutions, it also means strong changes in mentalities, habits, tools and logistic processes, which we know will require willpower and a period of adaptation.

The new means implemented in THE BOX constitute a real digital transformation of packaging. They allow us to add numerous services with strong added value: geolocation, alerts from sensors, imaging, audio, rerouting during transport by simply changing the address on the screen, opening control, security against theft and breakage, anomaly detection, real-time interfacing with TMS (carriers) and WMS (warehouses)... the list is long and we are adding to it daily.

Last but not least, LivingPackets intelligence is all the more useful and relevant as it is close to the content, it knows and interprets what is going on all the time, throughout the transport. 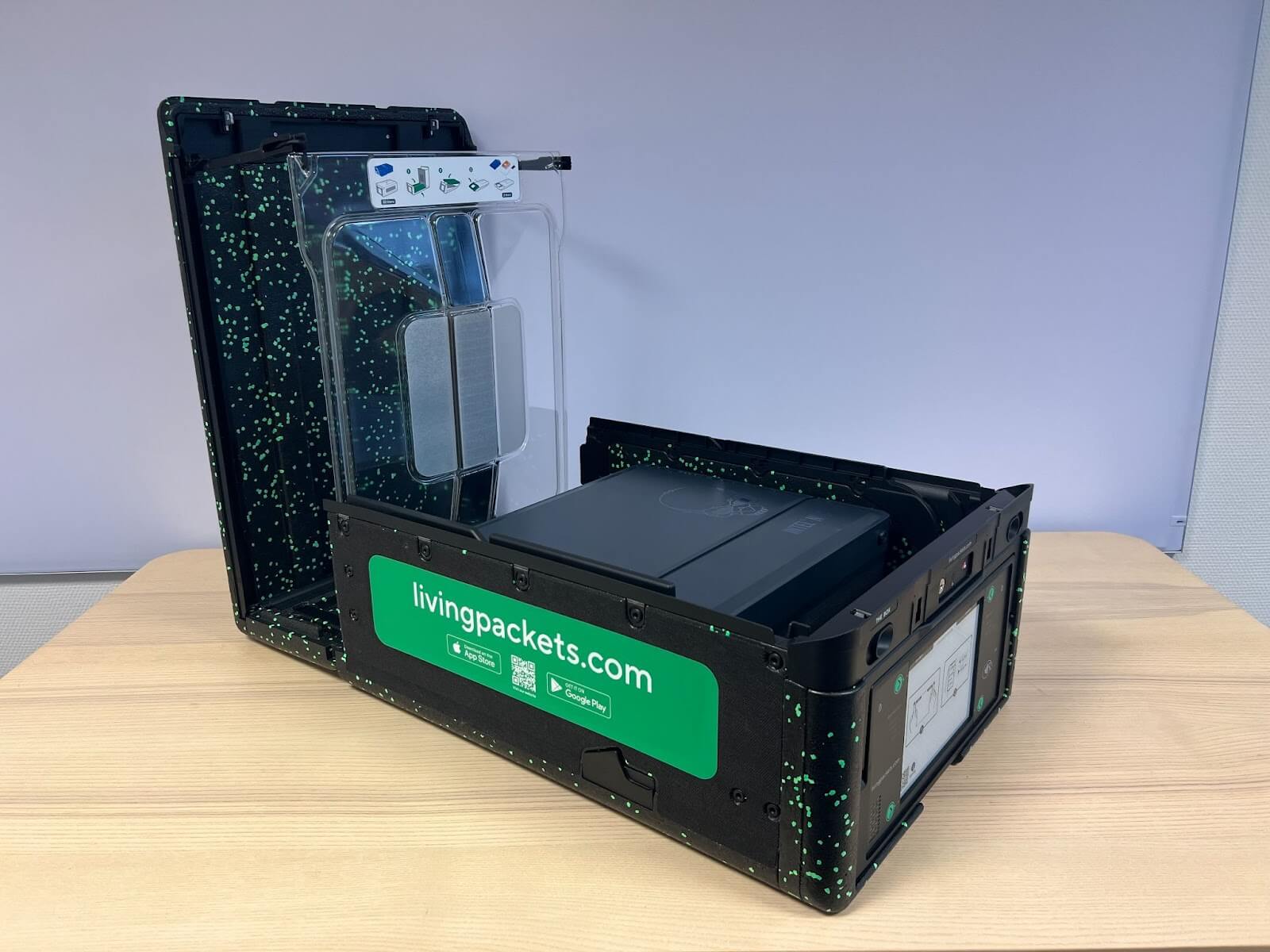 Go back in time through the history of packaging, a societal object, until the rise of smartpackaging. 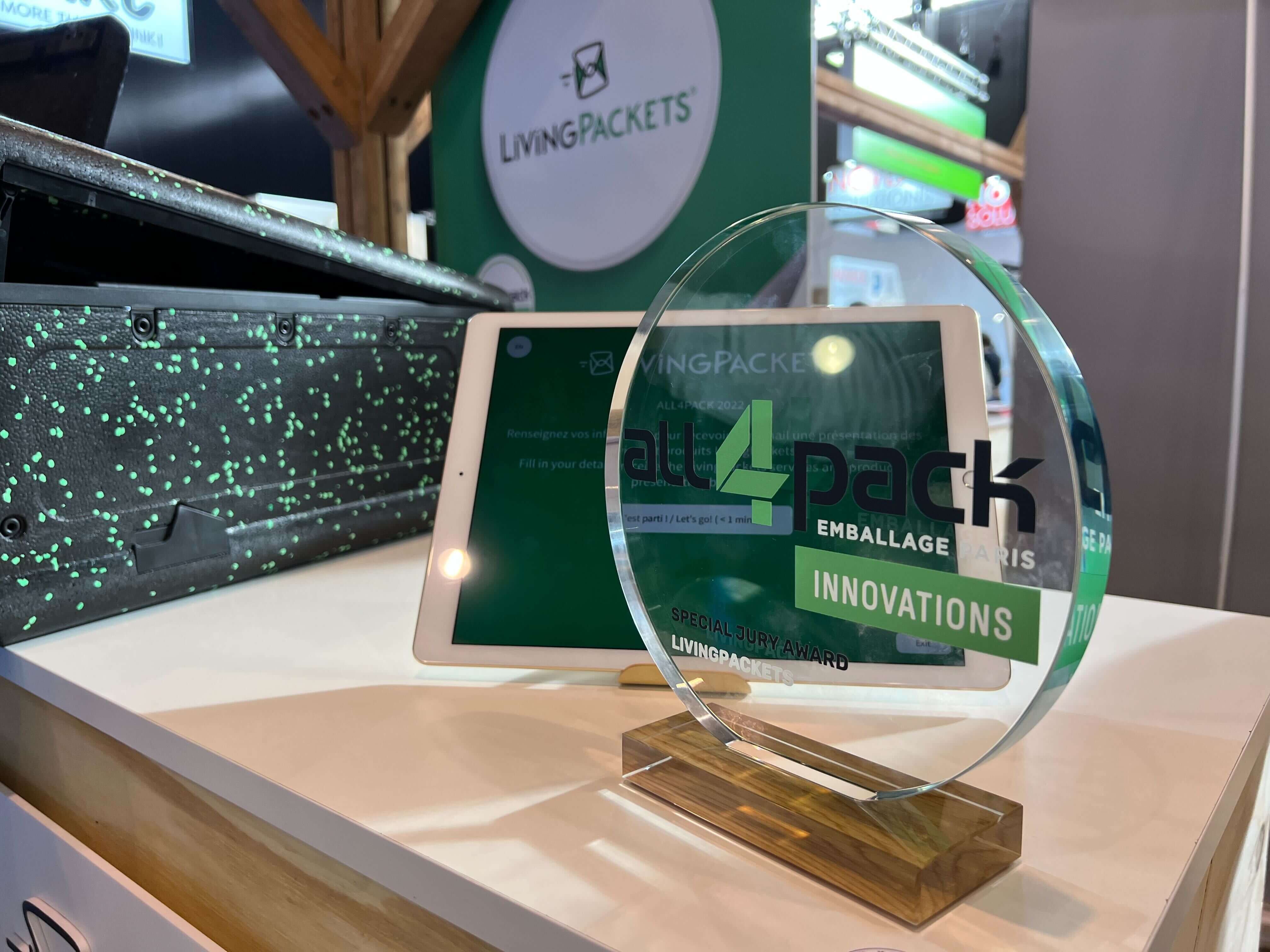 THE BOX, "Special Jury Mention" of the ALL4PACK Innovations 2022

THE BOX was awarded the special mention of the jury of the ALL4PACK Innovations 2022 competition.

Go back in time through the history of packaging, a societal object, until the rise of smartpackaging.

THE BOX, "Special Jury Mention" of the ALL4PACK Innovations 2022

THE BOX was awarded the special mention of the jury of the ALL4PACK Innovations 2022 competition.

Fill in the form below and one of our experts will get in touch with you as soon as possible to assist you in the best possible way.

Do you have general questions?